Audiogum provides APIs for controlling devices through voice commands, either by sending raw audio from a microphone, or text that has been transcribed by a third-party speech-to-text service. The APIs return remote control actions that a device can act upon.

To activate speech capabilities, a user (typcially through a companion app) must acquire a "delegated" user token via the /v1/tokens API using grant_type=token. The token API will issue a token that can be securely used by a device to operate on the user's behalf that should be passed to the device to securely store and use as it cannot authenticate as the user.

The user must use their own (pre-existing) user authentication access token to create a new token with the scope of speech. For more information about Audiogum authentication, see Authentication

The response contains a body as follows. The access_token, expires_in and refresh_token should be passed to the device.

If the user has multiple devices, each device must receive its own dedicated speech token. The deviceid is required in the request.

The access_token passed to the device as above will be used to access either the speech REST or WebSocket API, and the refresh_token should be used to refresh the access token when it expires. See Authentication: Refreshing Tokens.

These tokens are long lived. A speech access token created in this way will last 30 days (or 24 hours for test client_ids), and the refresh token will never expire.

If the device receives a 401 response status (or a voiceerror message with status 401 from the WebSocket) when attempting to access the speech APIs, it should assume the access token has expired. If the speech device fails to refresh the access token, it may retry, but after a small number of retries the device must assume that authorization to use speech services on the user's behalf has been revoked and stop retrying.

To use the streaming API:

The voiceproperties message must be sent by the device on the Remote Control WebSocket to initiate a voice interaction.
It may also be sent again during the interaction as necessary to update nowplaying data if the player state changes.
Each interaction should have a ref generated for it that should be sent in these properties, as well as in voiceevents.

To transmit microphone audio for processing, the device must send BINARY messages on the WebSocket. Recommended chunk size is 8KB per message, up to a maximum 32KB per message.

The device should not attempt to send more than 60 seconds of microphone data during the lifetime of a voice interaction. You may receive error messages after this time. Voice interaction can be re-started by sending voiceproperties with the initially required fields.

If the client does not intend to send trailing audio bytes (silence, background noise, etc), the client must indicate that no more bytes are expected. To do this, the client sends an empty (zero bytes) BINARY message or use the libaudiogum ag_voice_send_mic_terminator function.

When the Audiogum API has completed processing a voice phrase, it will return a TEXT message containing JSON with the type value voiceresult.

The voiceresult may include all the same fields as remotecomand messages from Remote Control API. In particular it may contain actions to be performed by the device and may contain respond indicating a voice response to play to the user.

See the commands documentation for details of actions and related features.

This message may be received many times, indicating that voice activity is still being recognised from the audio data. The standard voiceresult message will eventually follow when a phrase is processed.

If you wish to receive an instant reply that describes the transcribed text before Audiogum has processed the phrase, you can include "immediate": true in the voiceproperties message when starting voice interaction. Once a completed phrase has been recognised, you will immediately receive a message like:

This can be used as a signal to close the microphone and stop sending BINARY messages because no more speech will be processed for this interaction.

The standard voiceresult message will follow after the phrase has been processed.

In the following example, a user initiates voice control on a device and then talks to the device. The user says "play me something", the service interprets and sends the device a voice response and details of the action to play music.

The following timeline diagram illustrates a typical interaction as above: 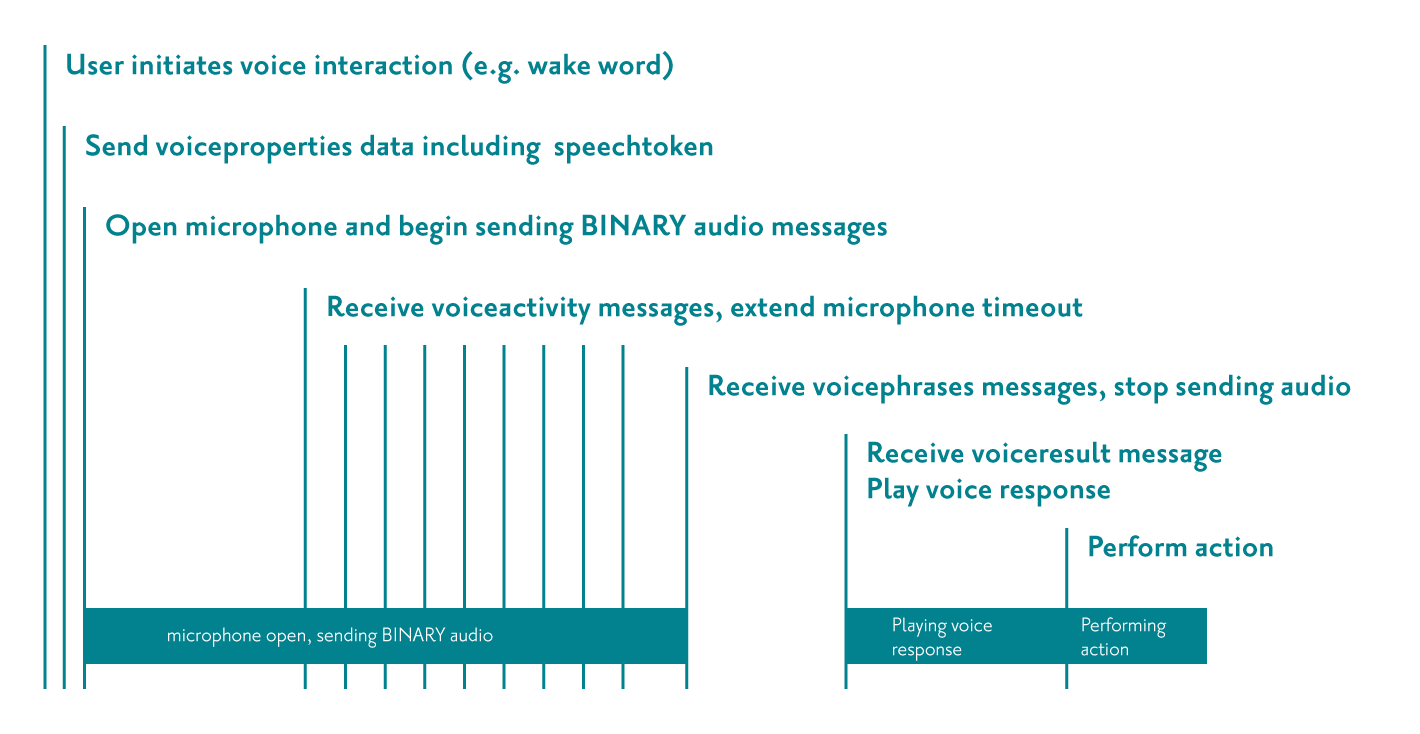 If the device sends a TEXT message that cannot be understood by the server (validation error, incorrect structure, unparseable JSON content, etc), the server will send an error TEXT message to the client via the WebSocket, e.g.:

If the device receives a message with status 401, it should assume the speech token is expired or invalid. See Authentication: On device. Example:

If the device attempts to send BINARY messages before voice interaction is properly initated it may receive this message:

Voice errors may contain a respond map with text, languagecode and audio as in a voiceresult message. This allows for a explanation of an error to be given as a voice message.

If a device successfully sends audio bytes and we can transcribe the content but can't be understood i.e. the sentence "Blah, blah, blah" it may receive this message:

The Remote Control WebSocket may also close in cases of unexpected communication errors, see RFC6455 §7.4.1 for a detailed description of each status code.

If the Remote Control WebSocket closes, any voice interaction ongoing at that time will fail and must be abandoned.

Audiogum can support two-way conversations with devices that indicate that they can use this feature. Conversations are enabled by setting the expectreply capability when connecting the Remote Control WebSocket (see Remote Control: Capabilities).

When enabled, some voiceresult messages may include "expectreply": true. In this case, after processing the respond and actions if any, the device should establish another voice interaction by sending voiceproperties message, opening the microphone and sending binary messages containing the encoded audio.

Whether using the REST API or a websocket, a capabilities parameter should be specified to indicate to the service which features are desired. More details on capabilities can be found on the commands page.

An alternative to the websockets API is the simpler REST API that will work for one-off commands as opposed to continuous listening.

The POST /v1/user/speech/text API converts the text of an instruction taken from a separate ASR engine into action. The API requires a "delegated" user token - see authorisation. Note that the capabilities parameter passed in controls some feature availability - see the commands page.

As shown, the successful case gives a 201 response code, but the Text REST API also returns error codes that match the websocket API:

The following examples illustrate some of the features enabled through Audiogum voice integration. Note that this is not an exhaustive list and Audiogum is continuously adding voice control features. New features will be automatically available to existing clients, subject to the capabilities declared by the device.

The following examples illustrate some of the informational features enabled through Audiogum voice integration. As above, this is not an exhaustive list and Audiogum is continuously adding voice control features. New features will be automatically available to existing clients, subject to the capabilities declared by the device and potential licensing costs with 3rd party providers.

These informational responses use the nowplaying information sent by the device alongside the voice request. For the artist and album informational intents, specific named items can also be used.

The following examples illustrate some of the dynamic playlisting and other forms of playback enabled through Audiogum voice integration. Again, this is not an exhaustive list and Audiogum is continuously adding voice control features. New features will be automatically available to existing clients, subject to the capabilities declared by the device and potential licensing costs with 3rd party providers.